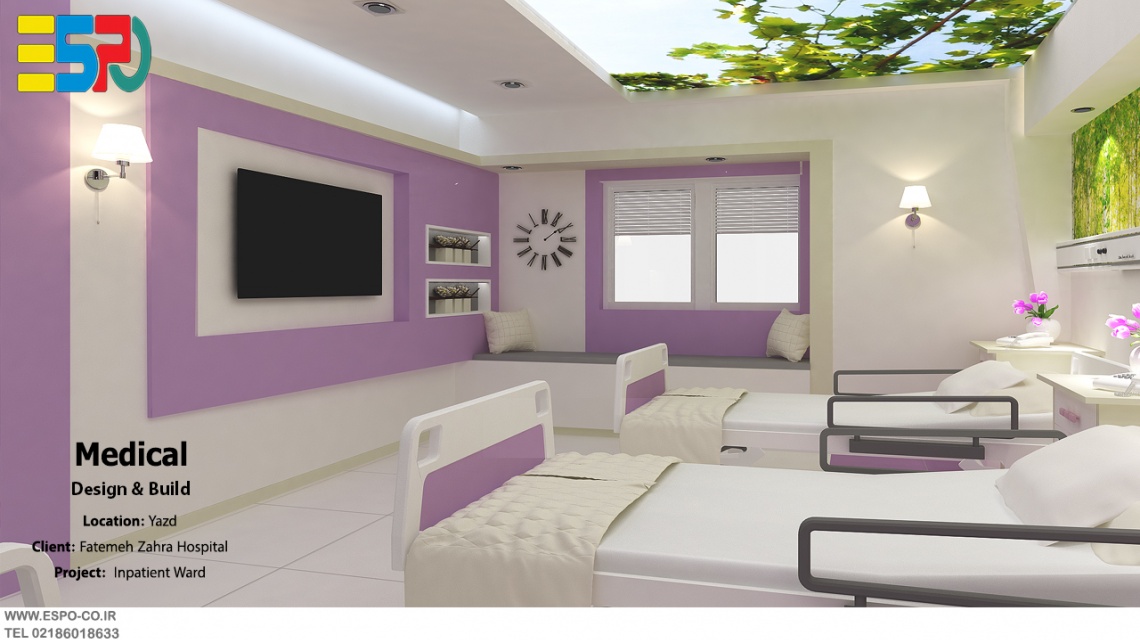 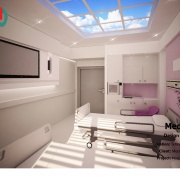 Standards, per capita, and introduction of different wards of the hospital
Inpatient psychiatric ward:
The neonatal psychiatric ward is the ward where patients with acute neuropsychiatric illnesses are admitted for clinical care and treatment, according to the treating physician.
The presence of the following spaces in the psychiatric ward is essential:
Patient aeration, preferably in a green and open environment, shared access corridor to rooms, drug room and clean workroom, an isolation room for critically ill or high-risk patients, aristocratic nursing station for all patients, physician reporting room, toilets Separate for staff and patients, meeting place, patient smoking room, electroshock room, occupational therapy, counseling and a psychiatric room with group therapy facilities, support spaces such as nurses 'rest and locker room, separate staff and patients' dining room and dining room, working room, Clean supplies warehouse, medical equipment warehouse or parking lot, separate storage area for infectious and non-infectious waste, patient prayer hall
The following spaces are recommended in the psychiatric ward:
Landscaping and ventilation of patients in green space, separate toilets for clients and visitors, initial examination room by the doctor, separate room or space for meeting, preferably outside the building
The infrastructure of the psychiatric hospital ward:
Neurological patients are unable to access emergency exits. However, this exit must be marked with clear signs for the staff of the department.
The presence of at least one infectious isolation room in addition to the neural and psychiatric isolation room in the psychiatric ward is mandatory.
Access from the psychiatric ward to other necessary hospital services, such as operating rooms, emergency rooms, laundry, elevators, etc., and vice versa, is easily possible.
Special arrangements should be made in all rooms and spaces of the psychiatric ward in such a way as to eliminate the possibility of any self-harm and alteration of patients.
It is forbidden for the patient to make available any sharp and winning objects such as knives, glass, razors, etc. in any way.
In the psychiatric ward, only Securite glass can be used for interior doors and windows. If the psychiatric ward is on the third or higher floor, bulletproof glass is required on the exterior wall windows. In any case, the use of ordinary glass in all spaces of this section is prohibited. Glossy steel or unbreakable mirrors can be used for mirrors.
Hospital rooms for psychiatric patients should have no doors. Or if the door is installed, they do not have a lock.
It is recommended that psychiatric wards not have toilets for further monitoring and control. And it is preferable to use safe and adequate public health services inside the ward.

It is forbidden to have any vents in the rooms or other spaces through which the patient can hang himself and commit suicide.
The minimum height of the psychiatric ward up to below the false ceiling must be at least 3 meters.
The electroshock room must be located inside or adjacent to the psychiatric ward and have an independent entrance. In such a way that other patients are not able to see the patient after the shock. The minimum area of ​​the electroshock room is 18 square meters and the minimum recovery area after the shock is 9 square meters per recovery bed.
The lights used in the inpatient ward should not be in a way that irritates or excites patients.
The psychiatrist has no access to any socket or power cable with a voltage of more than 24 volts.
The lights of the psychiatric ward should be built-in and have polycarbonate or unbreakable glass cover. The use of pendant lights is prohibited.
The intensity and direction of the light of the lights in the psychiatric hospital wards should be such that the light does not hit the eyes of the patients directly and does not cause them discomfort.
The electrical system of the psychiatric hospital ward must be equipped with flow leakage protection equipment
(John's protective relays).
The inpatient ward should be equipped with automatic control systems such as cameras
CCTV systems, alarm systems, and alarms in different parts of the department.
The location of the psychiatric ward in the hospital is allowed up to the second floor. Unless all safety measures have been considered to save the patient's life.
The use of cheerful and soothing colors and sound-absorbing materials in the psychiatric ward is essential.
The materials used in the inpatient department of neurology and psychiatry should be such that while creating a happy and refreshing atmosphere for the patient, they prevent the occurrence of audio, optical, and visual abnormalities.
Imaging sections:
The imaging department, which may consist of several subdivisions such as radiography, ultrasound, MRI, CT scan of CT SCAN, nuclear medicine, densitometry, radiotherapy, mammography, etc., is zoned in the paraclinical area or Outpatients are placed. It is important to have good outpatient relationships between these departments and other hospital departments. In large hospitals, all imaging departments should be located in a centralized building in the paraclinical area. It is also recommended that the emergency department and clinics be equipped with separate radiology, ultrasound, and CT scans, if possible.
The infrastructure of the imaging department:
The minimum area and height of the control rooms, techniques, and devices related to each of the equipment under the imaging department depends on the type and model of the device and is determined by the manufacturer.

The minimum useful area of ​​the reception and response space in the imaging section without taking into account the bathroom and the entrance space is 8 square meters.
Access to imaging is easy for outpatients and inpatients. Also, the relations of the imaging department with other required hospital services such as emergency, hospital wards, laundry, elevator, etc. should be easily provided.
Special arrangements should be made in the design of the rooms and spaces of the imaging department so that the patients, staff, and companions of the patient care at the lowest rate of unwanted radiation. And the patient service process is the easiest.
The location of the MRI magnet room should be such that it is within its magnetic field
It is usually oval, with no medium to heavy moving ferrous metals such as elevators, cars on the surrounding streets, and so on. This affects the image quality. Fixed metals, such as building skeletons, are calculated and shielded by the machine manufacturer.
To prevent other people from being exposed to radiation, the place where patients enter and leave before and after injecting radioactive materials into the nuclear medicine department must be separate and independent of each other.
Rooms and spaces in the nuclear medicine department, which deal with injected patients, should be kept in a separate tank, usually a burial chamber, for at least 24 hours before entering the main sewer or hospital treatment plant. After the half-life of their radioactive materials, they enter the sewage network.
In the field of nuclear medicine, to prevent other patients from being exposed to radiation, the waiting area of ​​patients before and after injecting radioactive materials should be separate and independent of each other.
It is recommended that the location of the imaging department in the hospital be up to the first floor, due to its special structure and requirements and having different shields.